I loved this game! It had everything that a game of its type should, including some unique features and some that have been seen before but never executed this well.

What can I say? I am a sucker for anything dark. I saw the trailer (Posted on the forum back at E3) and pre-ordered it. It delivered almost everything I expected (Except for the ending!)

You start out with the most basic entrance, typical of most video games. Immediately you are given a choice as of what to do. Choices usually only come to play during the main plot, so it was a nice addition. I am not sure how much it would have affected the initial level of the game, but it was nice none-the-less. The game escalates fairly quickly when the person your character is there to protect, is killed. The game dumps you right into the action against the hardest enemy of the game, yes that’s right, the first fight of the game is against the hardest enemy.

This isn’t a recap of the game, so I'll try to not ruin too much or go on for too long. As with any good game, the game gives you a good array of weapons, health and mana potions (very easy to find!) and multiple ways of getting through each level. It also gives you the option of killing any targets you may have, or non-lethally removing them from the picture. (This aspect determines the games ending, but more on that later) In addition to all of that, it gives you a nice prison break level to top it all off! Who wants to play a game without one of those? (No really, I don’t want any more games released without one!!!!!)

Almost all items sitting around can be interacted with, broken or thrown. Although not perfect (really, is that even possible?) its damn close!

The game explains to you everything you need to know, anything more (or optional) can be learned by exploring or reading books and notes. This makes the game great for those who want to rush the story and finish it, those who don’t have to sit through long story segments, and those who want to be deep into the game. Cinematic can be skipped, but not by accidently tapping a button on our mouse or keyboard, but rather holding one down for 4 or so seconds. Brilliant!

While the graphics aren't the most crisp HD in the world, they are stunning. They get the point across and they look good doing it. The world is a very steam-punk era design, and it looks amazing. It is very realistic in doing so, none of that flying with paper wings crap I've seen in the past! The cinematics are built using the in-game rendering, which means they don’t stand out from the rest of the game. I know that most games do it this way, but there are some games that use CGI based cinematics instead of in-game rendered, and they may look good, but they stand out too much!

The audio is very loud, I definitely recommend turning your volume down, especially if you have a big subwoofer like me. Like the gameplay, the audio really engulfs you into the game. It’s eerie when it needs to be and fast paced when its crucial. The sound effects are accurate (ie glass breaking etc) and make you feel like you are really there. Overall, I am classified as an Audiophile, so my expectations are usually pretty high. The audio in this game was amazing! 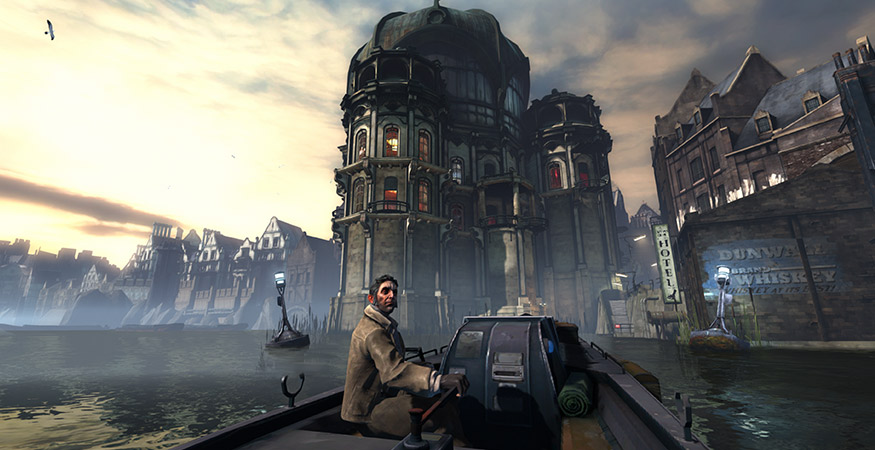 The weak point of this game was the ending. You save who you need to save, kill (or not kill) who you need to, and you are given a short cinematic. In the cinematic, it is small floating ’islands’ with scenes on them, all of them frozen in a dramatic state. Alongside this you get a voice over explaining what happened after the game ended, and then to credits. There are certain requirements for each ending, giving you a reason to replay the game over again and change your decisions, offering you a new challenge as most people will simply do what comes naturally (Kill or stealth). I personally replayed the game just to further explore, so far I have only replayed 2 levels and have already found SOOO much more. For a game with fairly high standards, I felt the ending was just 'chucked in', much like the Mass effect 3 one. This is of course a personal opinion, many others believe the endings to be 'artsy' and fairly well made. Overall, the game wasn't a very long one per say (So for some it may be worth waiting until the price drops) but it's replay ability is high. If you properly explore the game the first time (meaning no replay ability) then the game is substantially longer.

For those who want to watch them, I will leave you with the 2 ending cinematics. They contain spoilers, but will NOT ruin the game for you. Enjoy!

Thank you for reading!

Please Note: The opinions in this article are those of the author and in no way directly reflect or represent the opinions of The Abyssal Gaming Network or any of its affiliates.

There are no comments to display.

You will be able to leave a comment after signing in